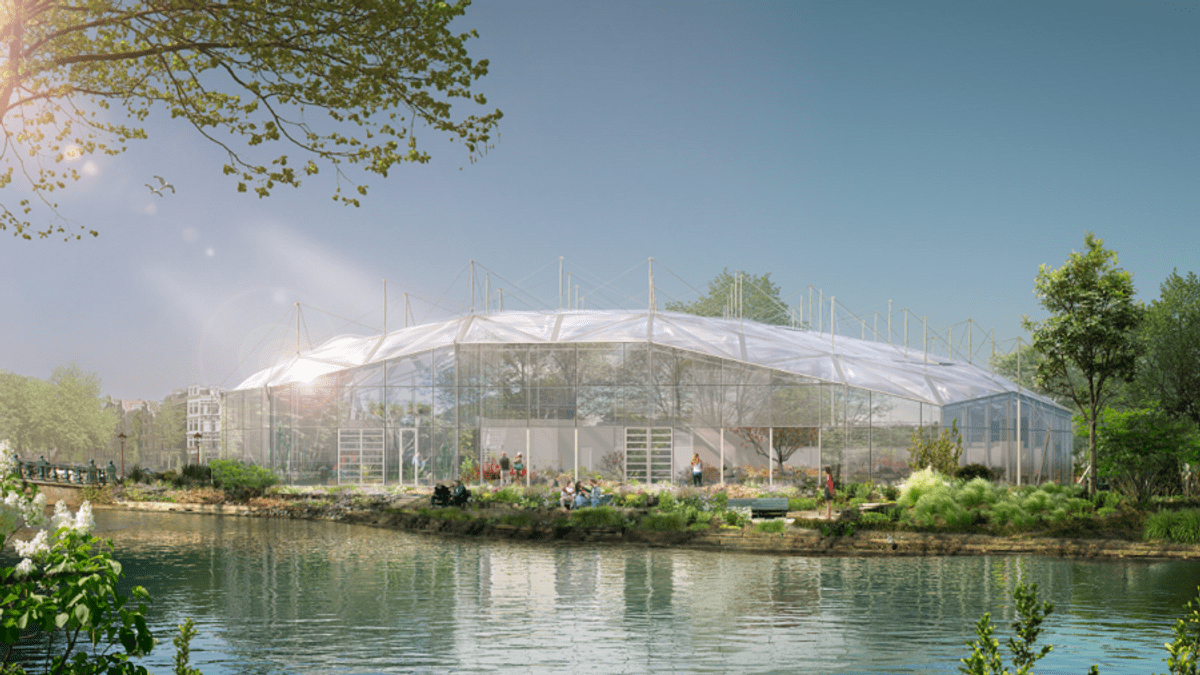 The Hortus Botanicus Amsterdam is on the eve of a major renovation. The large greenhouse on the new Herengracht will be the first sustainable, gas-free public greenhouse in the Netherlands. Moreover, it is the only place where the importance of plant biodiversity and its relationship with climate is explained. The final design is ready and approved: now the Hortus can get to work.

Leading role for biodiversity and climate
The Hortus Amsterdam is one of the oldest botanical gardens in the world. It has been functioning as a learning garden since its foundation in 1638. The Hortus teaches about plants and teaches people about the importance of plants for life on earth. Now that biodiversity is under pressure worldwide, this role of the Hortus is becoming increasingly important.

The current Three Climate Greenhouse dates from 1993 and urgently needs to be renovated; the Hortus seizes the opportunity to sustainably renew the greenhouse – entirely in line with its own mission – and thus become the first climate-neutral public greenhouse in the Netherlands. “If we want visitors to act differently, namely with care for nature, then we have to inspire them and show them that this is possible,” says director Carlien Blok. The greenhouse will have insulating walls, a roof made of ETFE and smart, energy-efficient climate systems. This, in addition to the previously realized heat and cold storage with the Hermitage Amsterdam, ensures that the entire greenhouse, including the tropical section, can be heated without gas.

Costs 8.5 million
At the beginning of December, the plan was approved by the Supervisory Board of the Hortus. The project will cost 8.5 million euros: a lot more than the original budget due to the increased construction costs and inflation. “4.5 million has now been financed and we can count on a loan of at least 1 million. But we are not there yet,” says Blok. “We still have a big challenge, but I am confident that we will succeed. The themes that we are going to highlight in a unique way are so urgent that I count on people wanting to contribute to this.” The current greenhouse will close in 2024 for renovation and will reopen in 2025, the year in which Amsterdam celebrates its 750th anniversary.