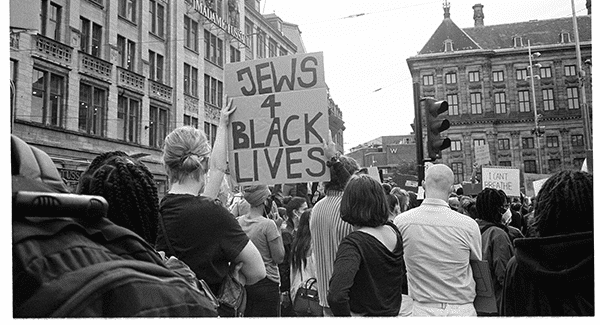 Anti-Semitism is back, the figures don’t lie: in the Netherlands, the number of anti-Semitic acts increased by 126 percent from 2017 to 2019. In a large-scale survey conducted in twelve European member states, 90 percent of the Jews surveyed indicate that anti-Semitism is on the rise and nearly half of European Jewish youth have experienced anti-Semitism in the past five years. Yet Jews and hatred of Jews are rarely mentioned in this time, when anti-racism and other emancipation movements are becoming more and more in solidarity with each other. What is going on here?

Video installation and events Are Jews white?
The Jewish Cultural Quarter, together with guest curators Gideon Querido van Frank, Lievnath Faber and Anousha Nzume, will consider where Jews are on the spectrum of current identity and representation politics. Are they seen as perpetrators or victims? Privileged or disadvantaged? How do they see that themselves? And how do others perceive them?

Are Jews white? includes a video installation with interviews in the Kunstkabinet of the Jewish Historical Museum. In collaboration with various locations in Amsterdam, an extensive program of events is organized around this theme with debates, performances and interviews.

Where Kunstkabinet, the Jewish Historical Museum